"The Scottish Vein Centre is the first private vein clinic in Scotland to be graded as EXCEPTIONAL by the independent health sector regulator, Healthcare Improvement Scotland. The full inspection report is available here and also published on their website"

All patients we see at first assessment, without exception, will undergo Doppler ultrasound scanning to check both superficial and deep veins for faulty valves. This is best medical practice and our company policy.

In July 2013 new guidelines were published by the government health advisory agency, the National Institute for Health and Care Excellence ( NICE ) stating that the non-surgical treatments for symptomatic varicose veins should always be offered in preference to vein surgery, based on best medical evidence. We have been offering these treatments since 2006 and below we will summarize what is involved with these superior methods. Find out more on www.nice.org.uk/CG168

Depending on size, location depth and twistiness of varicose veins, different techniques are suitable. Usually varicose veins involve either the main superficial vein on the inside of the thigh, the great saphenous vein ( GSV ), or at the back of the calf, the small saphenous vein ( SSV ). These veins are normally too deep to be seen under the skin, but are relatively straight and are therefore highly suitable for our new endovenous ablation procedures. These are :

Endovenous means “within the vein” and ablation is the process of killing off the vein by heat shrinkage. Both methods above differ mainly in the way the heat is delivered. We pride ourselves at the Scottish Vein Centre in being able to offer a full range of varicose vein treatments that will comprehensively deal with ALL leg vein problems without ever having to refer anyone for varicose vein surgery.

Laser light energy of a single wavelength is transmitted along an optical fibre from a generator directly to the fibre tip, where it is absorbed by the vein wall. The fibre is protected inside a long skinny tube ( sheath ) which is first passed up the long straight vein. The fibre just protrudes from the end opening and is steadily pulled back along the treated length of vein until the initial puncture hole is reached. 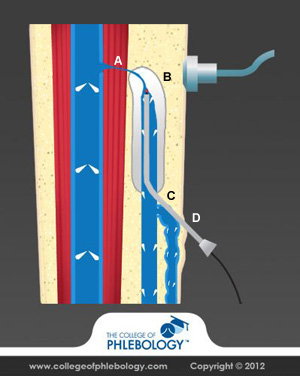 A. LASER ENERGY CLOSES THE VEIN IMMEDIATELY
B. LOCAL ANAESTHETIC (TUMESCENCE) IS INJECTED AROUND THE VEIN THAT IS BEING TREATED
C. EVLA SHEATH AND FIBRE (OR EVLA DEVICE) HAS BEEN PASSED UP THE VEIN INTO THE CORRECT POSITION UNDER ULTRASOUND CONTROL
D. EVLA FIBRE IS USED IN SOME SYSTEMS – WITH OTHER SYSTEMS, THE SHEATH AND FIBRE ARE ONE DEVICE 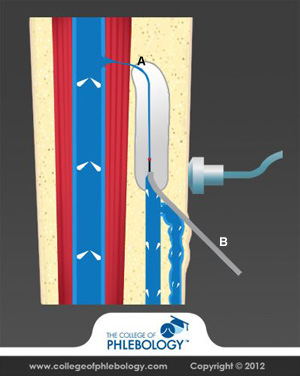 A. THE VEIN CLOSED BY EVLA IS DESTROYED BY HEAT – THIS HEALS BY ‘FIBROSIS’ – WHICH MEANS THE BODY DIGESTS THE DEAD VEIN, PREVENTING REGROWTH BY NEOVASCULARISATION
B. EVLA FIBRE BEING WITHDRAWN AT A SET RATE THROUGH A CANNULA TO ENSURE CLOSURE OF THE VEIN

The patient will not feel any pain or burning because prior to turning the laser on the whole vein has been anaesthetized with dilute local anaesthetic. This technique is called tumescent anaesthesia and is performed under ultrasound guidance and is normally well tolerated and makes immediate walking out possible.

We offer this procedure using the VENEFIT Closure Fast device and method. This is the longest established and most successful RF device internationally. Heat is generated within a special 7cm catheter tube by using a very high frequency alternating current, which heats up to over 80 degrees C and conducts the heat directly to any tissue in contact with it. By using a similar pin-hole ultrasound-guided technique to EVLA, the catheter is passed up to it’s highest position, the current is switched on and the catheter is withdrawn 5cm at a time, giving some overlap between segments treated. No electric current actually passes through the patient. Similarly tumescent anaesthesia is required to numb the course of the vein. 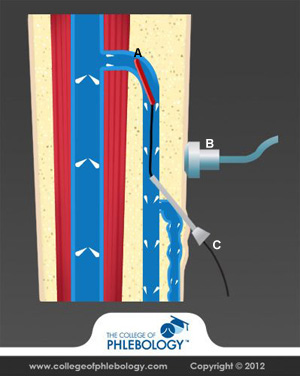 A. THE VENEFIT CLOSUREFAST(TM) CATHETER IS PASSED UP THE VEIN
B. ULTRASOUND PROBE USED TO GUIDE THE WHOLE OPERATION WITH THE GREATEST ACCURACY
C. THE CANNULA IS POSITIONED INTO THE VEIN UNDER ULTRASOUND CONTROL 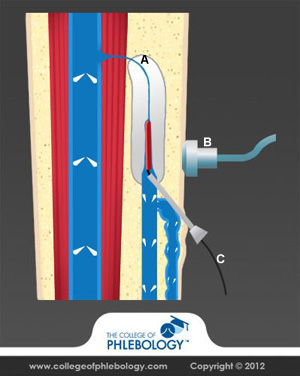 A. VEIN CLOSED IN 6.5-7CM SEGMENTS UNDER TUMESCENCE (LOCAL ANAESTHETIC) – FROM 2012 THE VEIN CAN BE CLOSED IN 3CM SEGMENTS IF NEEDED
B. THE ULTRASOUND GUIDES THE CLOSURE OF THE VEIN
C. THE VENEFIT CLOSUREFAST(TM) CATHETER IS PULLED BACK IN SEGMENTS

The advantages in modern vein treatment:

This is a very new addition to the existing endovenous methods and does not rely on heat to destroy the varicose vein. The basic principle is to produce an accelerated chemical ablation action by using a combination of abrasion of the inside wall of the vein with a direct sclerosant liquid applied simultaneously. A sclerosant is any agent that will cause hardening, in this case of the whole vein. The most common one which has been used for over 50 years is sodium tetradecyl sulphate ( STS ).. This is essentially a detergent that dissolves the fatty protein layer of cells lining the inside surface of veins making them useless to carry blood and they clog up. This is followed by inflammation and hardening of the vein ( sclerosis ). Over time the body slowly reabsorbs this dead tissue.

This is also an ultrasound-guided endovenous procedure, BUT IT DOES NOT REQUIRE TUMESCENT ANAESTHESIA !

There is a tiny catheter with a rotating tip which is introduced at the bottom of the vein to be treated via a small skin nick under local anaesthetic. The catheter is threaded along the vein to the correct higher position judged by ultrasound. Then the rotating tip is set in motion and simultaneously a slow injection of STS is delivered out of the end of the catheter directly to the damaged vein wall lining. The procedure is very quick and does not require any tumescent anaesthesia and is essentially painless. 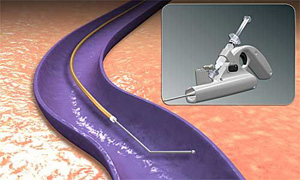 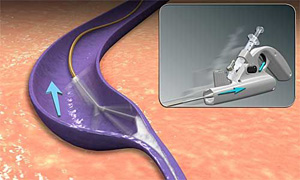 The evidence for this technique is rapidly emerging as more practitioners are using this method. There are now very promising 2 year results that are similar to the very high success rates for EVLA and VENEFIT. This method also needs a relatively straight vein to treat, but it has the advantage that it can treat very superficial veins without the risk of heat damage to skin or nerves.

This is also a relatively new method to efficiently treat varicose veins and has had approval from NICE, the NHS advisory body for best medical treatments. Ultrasound-guided foam sclerotherapy ( UGFS ) relies entirely on chemical ablation of the inner wall of the targeted vein as explained above. Two different chemicals can be used, STS as described above for ClariVein® and Polidocanol ( Aethoxysclerol ) which is another approved vein sclerosant . Previously these sclerosants would have been injected directly into a varicose vein as a liquid solution and relied on their effect to produce a local blood clot which then irritated the vein wall. By mixing a small volume of liquid first in a syringe with a gas ( commonly room air but carbon dioxide is used also ) and expanding the volume to be injected as a foam, then the chemical stays concentrated and does not mix with the blood in the vein but it displaces the blood. The vein then tightens up and will advance the column of foam further along the vein and it’s branches.

This method has been used by some varicose vein specialists to treat the whole length of an incompetent vein trunk, with faulty valves, but there is a tendency to need repeated injection sessions and over time the recurrence rate is about 1 in 5 come back at 3 to 4 years. Therefore at the Scottish Vein Centre we rely on the other ablation methods described above to treat the main problem vein and we use ultrasound-guided foam sclerotherapy for the twisting tortuous vein branches commonly seen below the knee ( we call “lumpy bumpy” ) and sometimes on the thigh. This is an excellent method to help treat veins that have recurred after previous varicose vein surgery, as they tend to recur as multiple very bendy veins.

Patients with thread veins and spider veins very often have underlying hidden venous incompetence and therefore we will perform Doppler ultrasound on all patients with vein worries, big or small.

In this way we can provide the correct thread vein treatment and will not try to treat visible thread veins without first treating their cause. This is best practice and is the strategy that gives us consistently excellent cosmetic results and high levels of patient satisfaction.

he principle of micro-sclerotherapy is the same as that for UGFS foam sclerotherapy for large varicose veins, i.e. destroy the lining of the vein by chemical ablation. The difference is that we need only use a very dilute liquid solution , as a foam agent would be too toxic to the vein and local skin tissue. Our preferred agent is Polidocanol, licensed only for this use and it can only be given by a medical practitioner for thread vein removal.

Please note thread veins removal by anyone other than a trained medical vein specialist will always be an inferior treatment. Other practitioners do not have the same therapeutic drugs, knowledge and skills that a recognized vein specialist has.

Following a detailed ultrasound examination the areas to be treated are illuminated with the patient supine and a tiny needle is inserted inside the vein, not around it. Slowly a small volume of dilute sclerosant is injected and because the needle is accurately placed, there will be good spread of the chemical along the many branching network of veins. Large areas with thread veins can therefore be treated with only a few tiny nips of a fine needle. This is very well tolerated.

Alternatives treatments for thread veins will often disappoint, often because they are not the right treatment if there are bigger hidden veins. Direct physical agents which are designed to damage tissue from the skin surface inwards such as Intense Pulsed Light ( IPL ) laser and Microwave therapy have mixed results depending on the patients skin type. Our philosophy is to only provide treatments that work and that have proven outcomes !

We do not underestimate the importance of good compression as an additional part of all of our vein treatments.

At the Scottish Vein Centre we have been applying graduated compression to all of our patients, both male and female, since we commenced practice in 2006. This applies to the most challenging of large varicose veins to the smallest thread veins and spider veins. The benefits of good compression include the reduction in bruising and swelling after endovenous ablation. The patients will mobilize immediately with stockings and will soon get use to them. The treated veins are kept compressed and will stay flattened with less chance of becoming hard and swollen. This is important for people who must be back on their feet and about their business soon after.

There are another group of conditions that affect the veins under the skin that are not related to faulty valves in the main superficial leg veins. These are congenital problems that can appear as purple swellings and blemishes on the arms and legs. They are called arterio-venous malformations ( AVM’s ). Some are only composed of clusters of small veins and are called venous malformations and are a relatively common form of “birth mark” which can last a lifetime. Some will also enlarge over time and can become unsightly and can affect limb function.

With the increasing use of ultrasound and other vascular imaging, the vein specialists at the Scottish Vein Centre have gained valuable experience in assessing and treating the venous –type of these abnormalities. Many of the same treatment principles apply to the sclerosing techniques used to shrink away unsightly veins.